The Rally of Northern Micro Aggression – A rally between scoo 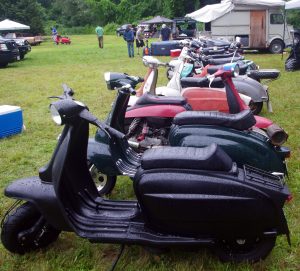 ter clubs of New England in the United States. The Boston Stranglers, The Small State Scooter Club from Rhode Island and the Idle Threats from my new home of Portland, Maine.

I learned some American History as I started asking about this “Northern Aggression” business. Apparently, The Partisan South often refer to the Civil War as the War of Northern Aggression, so I was pleased to learn that my new US scooter friends are carrying on the tradition of British tongue in cheek jabs, and intellectual, political sparring. The Rally of Northern Micro Aggression is held in Uxbridge, Massachussetts.  I’d been meaning to go for a few years and finally got round to it this August.  The $40 fee covered camping, breakfast, dinner and a swag bag of goodies – rally t-shirt, patches, magnets and other goodies.

My micro aggression was already in the red when I saw the weather forecast – thunderstorms for most of the day!  I had been looking forward to the ride-out through woods and lakes and crossing over the 3 States of Connecticut, Rhode Island and Massachusetts.  I arrived at the campsite on Saturday morning, mid downpour and swiftly headed for the ‘British Embassy’ tent (described by one of the organisers as a ‘few knuckleheads from so-called “Great” Britain) who were hosting breakfast this year.  A spread of breakfast foods were available to be washed down with the Bloody Mary’s on tap.  We quickly met some new folks here under the tents as I looked out at the line up of classic Lambrettas.  I hardly see Lambrettas in the States so it was nice to see some vintage scooters as we waited for the storm to ride through. 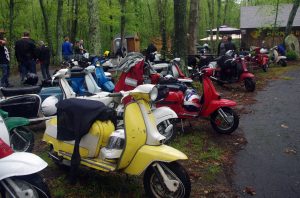 Once we got the all-clear around midday, we all departed on the rideout.  The ride took us on a winding journey toward Natchaug State Forest where we stopped at the Frog Rock Rest Stop for lunch.  Lobster rolls and clam chowder were on the menu for those seeking a New England flavour.  For dessert, a soft serve as they call it…with a lively discussion on American Sprinkles/Jimmies/ versus British hundreds and thousands. All agreed ‘hundreds and thousands’ wins.  By then the rain had cleared and we swiftly rode back to the campsite.  To be honest, the ride-out was a bit long and

fast for me. I didn’t get a chance to take in the scenery as I was concentrating on the road and the riders in front of me.  I might suggest that the ride be slowed down a bit next year so we can all appreciate the scenery a bit more – though I also appreciate that some enjoy faster ride on the country roads. You can’t please everyone. Overall it was fun ride.

By the time we returned to the campsite, the sun beaming down, it was hot, and the ‘snowflake’ themed gymkhana was underway. 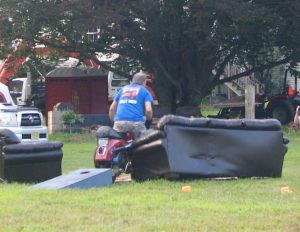 Brave attempts were made by many, but it was Jon who clearly stole the show, first with launching into the side of the ‘therapy couch’ and then showcasing his micro aggressions through the destruction of all the props which he dragged behind him.  Later, I took the opportunity to go on another ride-out with my fellow Mainers, the Idle Threats Scooter Club.  We ventured upon the local town of Moonsawcut and found an ice cream joint where we randomly met a chap who had been gifted a GS150 and was excited to talk with other scooterists.   Back to the campsite in the moonlight and dinner was underway.  Indian take-away was laid out on the tables and I have to say, it was pretty good Indian food – something that I miss after moving from London to the United States.

After the meal, we hung around the fire pit enjoying a few local beers before the raffle where Eric from Boston basically won everything, including the ‘asshole trophy’ for winning all the raffle prizes.  There was no scooter ‘do’ – mostly people hung out by the huge bonfire for the rest of the evening.  There were rally tunes playing and everyone was chatting with old friends and making new ones.  I would have stayed up later but a large spider emerged from my chair and was clearly going to kill me – it was time for bed. I woke up on Sunday morning with no hangover (a pleasant change) and enjoyed a leisurely drive home. 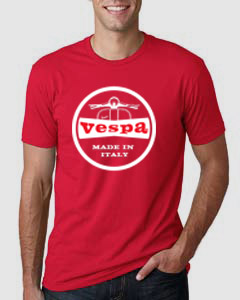